With a stay at King Fahd Palace in Dakar, you'll be on the beach and close to African Renaissance Statue. This 5-star hotel is within the...

With a stay at Pullman Teranga, you'll be centrally located in Dakar, walking distance from Presidential Palace and close to IFAN Museum...

Located in the affluent Fann Corniche area of Dakar, Radisson Blu is housed in a contemporary building with outdoor pool. It features...

When you stay at Hotel Lagon in Dakar, you'll be by the ocean and convenient to Presidential Palace and IFAN Museum of African Arts. This...

With a stay at ibis Dakar in Dakar, you'll be convenient to Presidential Palace and IFAN Museum of African Arts. This hotel is within...

A stay at Hotel Faidherbe places you in the heart of Dakar, convenient to Dakar Grand Mosque and Presidential Palace. This hotel is...

With a stay at Onomo Dakar Airport Hotel in Dakar, you'll be near the airport and close to Stade Leopold Senghor and African Renaissance... 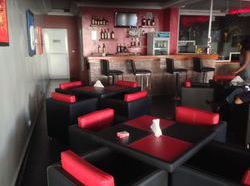 When you stay at Business Hotel in Dakar, you'll be connected to the airport and convenient to African Renaissance Statue. This hotel is...

When you stay at Casa Mara Guest House in Dakar, you'll be in the entertainment district and convenient to Cheikh Anta Diop University...

Novotel Dakar is located in the city center of Dakar, overlooking the Atlantic Ocean and the historic Goree Island. It features an...

Centrally located in Dakar, Hotel Baraka is minutes from Presidential Palace and IFAN Museum of African Arts. This hotel is within close...

Property Location You'll be centrally located in Dakar with a stay at Farid, minutes from Presidential Palace and IFAN Museum of African...

Located in Dakar, Sargal Airport Hotel is connected to the airport and close to African Renaissance Statue and Stade Leopold Senghor....

When you stay at Terrou-Bi Beach & Casino Resort in Dakar, you'll be connected to the airport and convenient to Cheikh Anta Diop...

With a stay at La Voile d'Or, you'll be centrally located in Dakar, convenient to Hann Park and Dakar Grand Mosque. This hotel is within...

Hôtel Le Sokhamon is centrally located in Dakar, walking distance from IFAN Museum of African Arts and close to Presidential Palace. This...

How many times have you heard about the Paris-Dakar Rally sporting event? If you’ve already been to Paris, how about taking a trip to Dakar, the capital of Senegal?

To discover the true essence of Dakar, you should stroll through its street markets, where you can put your haggling skills to the test. Kermel Market is one of the most popular in the city and an ideal place to purchase typical handicrafts of the region. But if you’re looking for eye-catching African fabrics, you’ll need to head for the HLM Market, which specializes in the sale of cloth from all over Africa.

Other attractions not to be missed in Dakar include the Great Mosque of Dakar, the Island of Gorée, which was declared a UNESCO World Heritage Site in 1978, and the IFAN Museum of African Arts. And if you’re a nature fanatic, nothing beats a guided tour through the Parc Forestier et Zoologique de Hann, where you can experience Africa in its purest state!

In Dakar we will have overcast clouds, light clothing is recommended as the temperatures will be warm throughout the day.

Points of Interest in Dakar

It depends on the category of the hotel. If you want to stay at a 4-star hotel in Dakar, the average price per night is 55 €, while you will pay an average of 36 € for a 3-star hotel, and in a more luxurious 5-star hotel, you"ll pay around 88 €.

You can make reservations at Hotel Terrou-Bi and Radisson Blu Hotel Dakar if you´re looking for a hotel with valet service for your visit to Dakar.

If you need a hotel with disabled access in Dakar, we recommend Hotel Terrou-Bi, Radisson Blu Hotel Dakar and Hotel Ibis Dakar.

According to our clients, if you´re travelling with children, the best hotels in Dakar are Hotel Lagon 2, Radisson Blu Hotel Dakar and Hotel Terrou-Bi.

If you want to save time, the hotels in Dakar with express check-in and check-out are Radisson Blu Hotel Dakar, Hotel Ibis Dakar and Hotel Pullman Dakar Teranga.

Some of the options for hotels with non-smoking rooms in Dakar are Hotel Terrou-Bi, Radisson Blu Hotel Dakar and Hotel Ibis Dakar.

If you're bringing a vehicle, we recommend that you book a hotel with parking in Dakar, like Hotel Terrou-Bi, Radisson Blu Hotel Dakar or Hotel Ibis Dakar.

The best hotels with a pool in Dakar are Hotel Terrou-Bi, Radisson Blu Hotel Dakar and Hotel Pullman Dakar Teranga.

The best-rated hotels in Dakar with a gym are Hotel Terrou-Bi, Radisson Blu Hotel Dakar and Hotel Lagon 2.